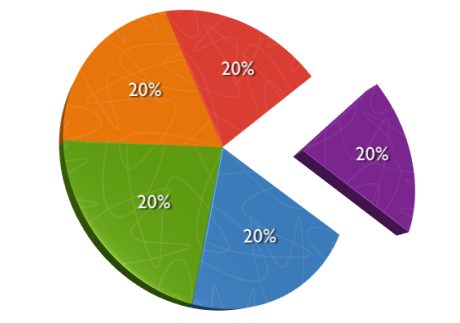 Share of Voice is a local business' percentage of all the advertising done in her market for her category.

Share of Mind is the percentage of all the people exposed to those ads who think of Jane first and feel best about her when the decision to remodel a kitchen comes to mind.

Let's make another simplistic assumption: All of their ads say just about the same thing in the same manner. They look and sound like average ads.

With these assumptions, you could make the case that NONE of these businesses will be getting much increased business from their advertising efforts.

WHAT IF Jane were to FOCUS her ads on one media? Let's say she decided to take her entire budget and run 20 ads per week on a single cable channel, only focusing on remodel shows in the evening hours. Even if her ads remained average, the frequency and repetition she would achieve with the fans of the remodel shows would make a difference in her sales.

When these people finally decided to shut off the TV and get busy in their kitchen, Jane would be the first phone call because she'd be the first business they think of and feel confidence in…simply because of the repetition.

Quit trying to "reach" your way to advertising success. Start putting your money into some smart frequency and it won't be very long until your focused Share of Mind begins to pay off!

That's the first sub-formula in the Advertising Performance Equation. If you want to learn more about the rest of the equation, just sign up for my email list. You'll be the first to know about an exclusive learning opportunity!