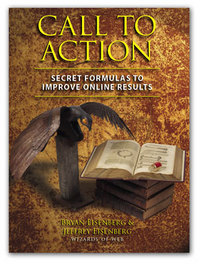 In January of 2003, Roy Williams declared that it would be the year of the internet’s Bar Mitzvah.

Now, two years later, our friends from Brooklyn have proven that what’s only worked before with strong brick-and-mortar support is possible using ONLY word of mouth, blogs and a little help from your friends.

The first title from Wizard Academy Press to make it onto the best-seller lists of The Wall Street Journal, The New York Times and USA Today is also the first book in history to do so without store sales.

Most people would be thrilled to get on these lists and make it their goal to do so using any means possible. Jeff and Bryan Eisenberg made it their goal to go into the gunfight armed with only a pen-knife and they won!

Not only that, but the book is extremely valuable to anyone who wants to succeed on line.

3 thoughts on “Two years after the Bar Mitzvah…”