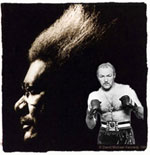 [note from Dave: ok, so I’m just now getting around to posting Roy’s Monday Morning Memo. I’m technically vacationing with my family in Texas. Our hotel didn’t have internet access because I don’t count dial-up as access any more. So, I’m now posting this from the Academy Hall where I will be fine-tuning the blogging workshop this afternoon. If you know people who ought to be blogging but don’t want to spend a great deal of time learning the tricks, send them to the blogging workshop.]

As a boxer, Chuck Wepner earned the nickname “The Bayonne Bleeder” because of the punishment he took even while winning. Tom Donelson of Inside Boxing writes of him, “Wepner was what one would call ‘a catcher’, a fighter who often used his head to block the other guy’s punches – not the kind of strategy that leads to long careers… He constantly pressured his opponent until he either won or was knocked out. He never truly cared how many shots he would absorb before landing the telling blow.” Trainer Al Braverman called Wepner “the gutsiest fighter I ever met. He was in a league of his own. He didn’t care about pain or cuts. If he got cut or elbowed, he never looked at me or the referee for help. He was a fighter in the purest sense of the word.”

When Wepner knocked out Terry Henke in the 11th round in Salt Lake City, boxing promoter Don King offered Wepner a title shot against then-heavyweight champion George Foreman. But when Ali defeated Foreman, Wepner found himself scheduled to fight The Great One – Muhammad Ali himself. On the morning of the fight Wepner gave his wife a pink negligee and told her that she would “soon be sleeping with the heavyweight champion of the world.”

Ali scored a technical knockout of Wepner with just 19 seconds remaining in the fight.