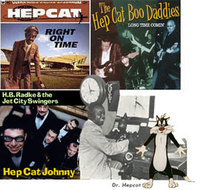 It was a term once used to describe exceptional jazz musicians. African-Americans spelled it "hepcat," while their white counterparts heard "cat" and assumed "hep" to be a modifier. Hence, "hep cat."

In 1942 Bob Clampett created the first color Looney Tunes cartoon, The Hep Cat, featuring an unnamed feline that would later develop a lisp and become known as Sylvester, (derived from silvestris, the scientific name for the cat species.) Soon, people were being referred to as all kinds of cats, as in cool cat, crazy cat, and "hep" became "hip."

And it all came from the African Wolof word "hipikat," meaning, "someone finely attuned to his/her environment." Makes sense, right? An inspired improv from a blower in sync with his fellow jazz musicians would trigger the rejoinder "hipikat" from a bystander familiar with the African word. Anglos heard "hep cat" and a new, misheard word was born.

Language is an interesting thing. If you enjoyed that brief summary of "hep cat," then you’re definitely my brand of crazy. I enjoyed it, too. Arooo! Aroo-Arooooo!

Nothing changes when you win a footrace. But the person who wins the hearts of men and women can wonderfully change the future. Do you have the skill to win the eye, the ear, the doubting heart? Can you win the human race?

But the heart, the heart, remains in the hands of the arts. Journalists and novelists and screenwriters and musicians, painters and poets, playwrights and performers, sculptors and singers, architects and photographers shape our ever-changing mood and guide us toward the future. Artists such as these are attending Wizard Academy in increasing numbers since the methods and principles we teach are just as easily applied to the arts as they are to business.

Alumni interested in furthering their knowledge of the heart-arts will be delighted to know that discussions are continuing with acad-grad David Freeman to bring his paradigm-expanding Visual Emotioneering course to Wizard Academy. David is currently the object of an epic tug-of-war, with Hollywood pulling him into movies and Japan pulling him into video games. Both are willing to pay whatever it takes, but David really wants to hang with his homies at the Academy. Stay tuned.

Another Acad-grad Writes a Big Book: Bag the Elephant
(subtitled, How to Win and Keep BIG Customers.)

Steve Kaplan is the nicest guy you’ll ever meet, the boy every mom wishes her daughter would bring home for dinner. He could easily have been a regular on Mr. Rogers’ Neighborhood.

So did Steve become rich as a salesman because he was nice, or in spite of it? In his new book, Steve tells you exactly how he bagged the elephants, and how you can, too. I strongly suggest you pick up a copy at your local bookstore, or order one at amazon.com, (discounted there to just $13.57 in hardback.) Grab it now, before the first printing is all sold out and a waiting list is formed. And keep your eye on the bestseller lists. Wizard Academy grads are on the move.

Join us, and become hipikat.

1 thought on “Monday Morning Memo: What Kind of Cat are You?”