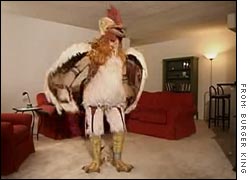 BK says the big chicken won’t be appearing at stores. It may end up in some advertising. This story from CNN Money says that Burger King wants to milk the chicken for everything it’s worth. Oops, let’s not milk it, they actually said capitalize on it.

While I originally posted that I felt like BK gave me something free with the site, I am now waiting for my next treat. I don’t think it’s there.

Branding experts think Burger King is doing the right thing by keeping the chicken out of the limelight, and said the mystique will allow it to retain its appeal among 20- to 30-year-olds who may not respond to more overt marketing.

“If they had that chicken in front of their stores, then it’s not doing what it was meant to do,” said Steven Addis, CEO of brand strategy firm the Addis Group. “It gets a quick cult following and that’s really what they are trying to go after.”

I beg to differ. There’s no chicken cult here. It was a big web meme and now it’s done. Go ahead Burger King, prove me wrong. Let’s see what’s next!