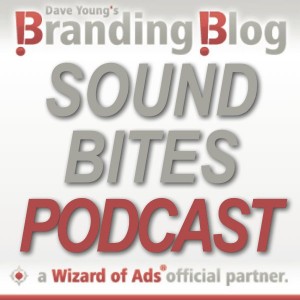 Chris: Welcome to BrandingBlog SoundBites. Dave Young is with us again from BrandingBlog.com. Dave is also a Wizard of Ads partner. Last time, Dave, we talked about the Ad Budget Calculator, which is a free tool that folks can use online to calculate an ad budget. Now you wanted to take it kind of to the next step, I suppose, and talk about the “myth of reach.”

Dave: The “myth of reach, it just sounds mythical, doesn’t it?

Chris: To start with, yes. What is the myth?

Dave: Well, the myth is that most advertisers, (it’s a big mistake advertisers make), they buy more reach than they can afford.

Chris: Okay. Stop right there and explain to me what you mean by “reach”? What are we talking about?

Dave: Right. Two key equations in the advertising performance equation are frequency and reach, and anybody that sells advertising is going to play to their strong suit. They either have a medium that has a huge amount of reach, meaning that if you ran one ad, it’s going to reach loads and loads of people. Super Bowl advertising is a good example of a high-reach ad.

Dave: You run ONE ad in the Super Bowl. You’re going to reach a billion people.

Chris: Is that because people, naturally, I guess maybe they don’t tune out but they don’t really catch it for awhile? Maybe they have to hear it a few times before it really gets their attention?

Dave: Absolutely. Unless you have what we call a high Impact Quotient, and we’ll talk about Impact Quotient in a future show because that’s a whole other topic.

Chris: I bring that up because that’s happened to me. I mean, there may be a commercial, whether it be on TV or radio or whatever it is, that I know I’ve probably seen 20 or 30 times, but never really stopped to pay attention to what it was. Maybe it’ll catch my funny bone at one point and I start laughing. My kids are like, “You’ve never seen that before?” I’m like, “Yeah, I probably have, but I didn’t really watch it.”

Dave: Often what happens is it’s because it was poorly written.

Dave: It fails to grab someone’s attention or it fails to have relevance. So you’re going to need lots and lots of frequency if you don’t have a very well-written ad. You certainly need way more frequency than you do if you have one that gets to the point, that’s relative to people’s lives, and gets the message across quickly and easily and powerfully. When we talk about Impact Quotient, that’s the ad’s ability to convince. If we look at it, Chris, in just some examples of events in your life, I mean, there are events in your life that you remember having only experienced them one time.

Dave: You can remember exactly where you were and what you were doing on September 11th, 2001. Nobody needs to remind you of that. It’s burned into your memory for the rest of your life. There are a few other events that are like that. People that are old enough, talk about that type of memory the day that JFK was shot.

Dave: Pearl Harbor. The day the space shuttle exploded. Those kinds of events have such a high impact that they’re seared into our memory and they’ll never get released. Well, guess what? Advertising’s not that powerful.

Chris: I thought you were going to have a secret formula where we could do that.

Dave: Joe’s Hamburger Stand is never going to have a message as powerful as 9/11. It’s just not going to happen, unless Joe kills all of his patrons in one day.

Chris: And that would be for all the wrong reasons, yeah.

Dave: Yeah, exactly. So it would have a high impact quotient but for all the wrong reasons.

Chris: Not good for business.

Dave: Not good for business, no. Now Joe could have a high impact quotient that would be good for business if he had some big, stupendous event. The problem is there’s no retailer that has an event that’s that big and that important to most people’s lives.

Dave: So what ends up happening is advertisers assume that their message is way more important than it is, and if only they could just get it to the biggest number of people possible, people would flock to their doors. The simple truth is that there really isn’t any business that has that big of an impact on any of us that one sampling of their message is going to make that big of a difference in our lives and, more importantly, our behavior and us coming to their door and buying what it is they have to offer.

Now the other thing that comes into this equation, Chris, is sleep. What your brain is really, really good at when you go to sleep is erasing anything that you heard today that isn’t relevant to your life. What has to happen is that you need enough frequency and enough relevance for your brain to put that into chemical storage instead of electrical storage.

Electrical memory is short-term. I’ll remember it maybe through the end of the day. A good example is I’ve got to remember where I put my car keys. I don’t have to remember that the rest of my life because they’re going to move. But I need to remember it right now, so it’s not going to be burned into chemical memory. But if you have a message that’s relevant and relevant to enough people, if you get that message in front of them … our goal is usually three times a week, and it depends on the media that you’re using on how to accomplish that.

It’s going to be different in newspapers. It’s going to be different on radio and television, billboards, whatever. But the main goal is to have a relevant message, get it in front of people at least three times in the course of a week, and that’s enough frequency that, over the course of time, they’re going to remember who you are, what you have, and they’re going to think of you without any kind of recall aid when they actually need what it is that you sell.

Chris: And you said something important there too – over the course of time.

Chris: It takes a little while.

Chris: You’re not talking … there’s not a formula like, okay, two billboards, three radio ads and two TV ads. It’s different for every business. I mean, this is something that you have to look at what they’re doing and who they’re trying to reach, right?

Dave: Yeah, you know the key for making it different for every business is the product purchase cycle.

Dave: So if you’re a restaurant, we can make things happen much quicker because people eat three times a day. If you’re a roofing company, it’s much harder. You’ve got to be on the air. You’ve got to be advertising for a long time because what you have to do is impact the way I think about my roof and make sure that you’re the company that I think of first and feel best about when I actually need a new roof.

Dave: Because there’s nothing you can do to make me buy a new roof when I don’t need one. Absolutely nothing. So you’re ultimate goal is to make sure that you’re in the marketplace, that you’re buying enough frequency, that you have a relevant enough message so that when the need finally arises, they think of you first and they feel good about you. That’s the ultimate goal in that. You can’t accomplish that by buying too much reach. You’ve got to focus. Most business owners don’t have the budget to follow kind of a national media mix type of strategy, where we’re going to spend this much on television and this much on radio, and we’re going to buy print and magazine and billboards and make this whole multi-media carpet-bombing of an ad campaign.

Dave: Most local businesses can afford to do one thing well, and that’s what they ought to be doing.

Chris: And how do they figure that out?

Dave: I can help them with that.

Chris: Okay. So they could use the tool that we talked about in the previous podcast, the Ad Budget Calculator, kind of figure out where they want to start with a budget or where they’re at and what they should budget, and then they need to take the next step and do it right.

Dave: There are too many variables in there for me to just give you an answer.

Dave: Radio is the right answer in some cases. In fact, in most cases, in most markets, we’ve found that radio is the most efficient way of accomplishing the type of frequency and reach that we want.

But it doesn’t always work. Let’s say you’re a chiropractor on the edge of town in a big city. You’re on an outskirt, not an outskirt, but a suburb that is kind of out on the edge and there’s no way you can buy radio without reaching way more people than will ever come to your chiropractic business. Nobody’s going to drive by 25 other chiropractors to come to your place. So radio’s not the best answer for somebody like that, and that’s just one example. I mean, but we help figure that ad out. That’s the next big problem is where are you going to spend this money, and how are you going to accomplish that type of reach and frequency?

Chris: And really make that money work for you and get value from your advertising for your business.

Dave: Absolutely. So that’s the myth of reach is if all you’re doing is going for reach, you’re probably making a big mistake.

Chris: Okay. And you can come back here to BrandingBlog SoundBites and get more information as we progress with this podcast. We’ll be giving you some more information. You can always contact Dave at BrandingBlog.com. Dave, you’re on Facebook. Some other places that people can contact you?

Dave: Yeah. Facebook.com/brandingblog is another easy way to find me.

Chris: Okay. Well, thanks for joining us.