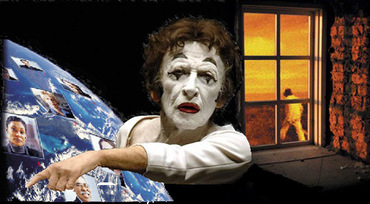 The number of passengers on Spaceship Earth has doubled (from 3 billion – 1959, to 6 billion – 1999,) in 40 short years. But we’re not discussing population growth today, I’m just opening your eyes to perceptual reality.

The cognoscenti of Magical Worlds will remember a brief discussion of perceptual reality at the beginning of class. "Each of you will sit in this room for 3 days and hear the same information presented in precisely the same way. But you’ll leave here having had an entirely different experience from the persons on your left and your right. You will connect different dots, have different epiphanies, make different associations. Objective reality will be the same for each of you. But your perceptual realities will be yours alone."

Given that we lived nearly sixteen and a half million years yesterday, it seems like one of us would’ve figured out how to end poverty, crime and war, doesn’t it? (Personally, I was really busy, so I was counting on you.)

Today’s illustration is an image of the famous mime, Marcel Marceau, superimposed over a photo of Earth with snapshots of women and men on its surface. To the right is the cover of Paul Finley’s awesome 14 Windows guitar CD.

You, reader, saw the same image as 30,000 other subscribers, but your perception was yours alone. You may have been confused by the image, amused by it, intrigued by it, or mildly or strongly disturbed by it. Perhaps you even saw a symbolic statement being made. I did not intend one.

Perceptual reality is yours alone.

Every door of opportunity begins as a…continue reading at Wizard Academy.