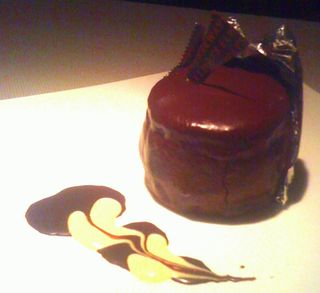 I'm gonna tell the long story. If you want the short story, skip to the last paragraph. Dinner last night was at Elway's, a bajillion-star restaurant inside the equally starred-up Ritz-Carlton in downtown Denver.

After serving us some amazing steaks, the waiter asked if we wanted desserts. We all declined. He then said, "Look, we're kind of famous for our Ding Dongs. I'm gonna bring you one for the table to sample. You shouldn't miss this."

I've talked about Word of Mouth advertising quite a bit and one of the best triggers is unexpected generosity. The Ding Dong rocked. Awesome. It's the reason I'm writing this story. Yes, I'm giving Elway's some WOM love because Max the Waiter gave me a quarter of a Ding Dong. At $9 on the menu, the dessert is likely made up of less than a dollar's worth of butter, flour, sugar, cocoa and yum. So, for the cost of a few pennies, Elway's got a blog post, a Facebook conversation, a tweet…and it's just the day after. Be remarkable. Be generous.

Now, for the SEO lesson.

After I posted this pic on Facebook, my Australian Wizard of Ads Partner, Craig Arthur, asked, "Is that a chocolate spider?" I thought I'd help him out by posting a link to the official Hostess site. Right now (I hope they change this) the Ding Dong page at Hostess has a video of Ashton Kutcher doing a "Ding Dong Doorbell" stunt and absolutely NO a brief description of one of their best-selling snacks of all time. I'm sure that some genius figured out that they weren't ranking as well as the Ding Dong article on Wikipedia and said they should leverage Ashton's use of a similar phrase to garner some SEO traffic. ARGH. If I wanted Ashton Kutcher, I'd type that into Google. The official Hostess page was in second place, but offered little relevancy. A photo of the box, but no real description of the product. I'm not even going to link to their site because I don't want to reward this kind of stupidity. I have no doubt that this blog post will soon be on the first page for a Ding Dong search and at least I offer a story and a rant about a better Ding Dong than Hostess makes. Go do the search. Let me know when they come to their senses. I'll edit in a link for them. 😉