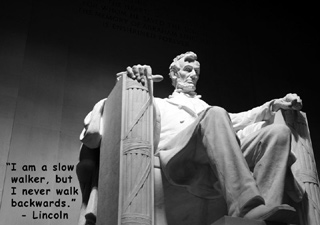 Determination is emotional, a moment of intense focus with clenched jaw and the visualization of a mission accomplished.

The sneer is gone from Casey’s lip, his teeth are clenched in hate,
He pounds with cruel violence his bat upon the plate;
And now the pitcher holds the ball, and now he lets it go,
And now the air is shattered by the force of Casey’s blow.

Oh, somewhere in this favored land the sun is shining bright,
The band is playing somewhere, and somewhere hearts are light;
And somewhere men are laughing, and somewhere children shout,
But there is no joy in Mudville – mighty Casey has struck out.

I’ve known men like Casey, haven’t you? All hat, no cattle? Big bravado, little substance? An alligator mouth with a baboon butt?

I’m sorry, but "merely determined" people seem shallow to me. Like Casey at the Bat, they get themselves all worked up, then just as quickly get unworked and wander off to do something else. Determination is transient.

But commitment is irrevocable, a decision that never looks back.

Ask someone you admire how they accomplished what they did, and they’ll likely tell you a story of despair and the strong temptation to chuck it all, throw in the towel and quit. But they didn’t. They hung on a little longer. And then one more day. And another…

Big things happen for the truly committed on the far side of the breaking point, long after the merely determined have quit and gone home. Does this sound unreasonable to you? Consider the words of George Bernard Shaw: "The reasonable man adapts himself to the world; the unreasonable one persists in trying to adapt the world to himself. Therefore all progress depends upon the unreasonable man."

So did Margaret Mead. "Never doubt that a small group of thoughtful committed citizens can change the world; indeed, that is the only thing that ever has."

Commitment steps up to pay the price when mere Determination runs for cover.

I speak of marriage, faith, and business.

In chapter 19 of the first book of Kings, Elijah, in a dark mood, runs to a cave in the wilderness and pours out his complaints to God, who instructs him to go and find Elisha, son of Shaphat, plowing with twelve yoke of oxen. Elijah found him and draped his cloak around Elisha’s shoulders. Recognizing that he’d been chosen to finish the job begun by Elijah, Elisha immediately slaughtered his oxen and cooked their meat over the fires of his plowing equipment. Elisha gave the meat to his co-workers and family, then set out to follow Elijah and become his attendant.

Elisha, a farmer, killed his oxen and burned his plow, leaving himself nothing to fall back on.

That, my friend, is commitment.

On the day you can answer yes, you will have learned what it means to be genuinely happy.

PS – Commitment. Are you beginning to understand why Chapel Dulcinea, a wedding chapel, was the first building to be constructed on the campus of Wizard Academy?

PPS – Our first Christmas Gift for you is a free, MP3 music download of an instrumental guitar solo by the renowned Phil Sheeran. Mother of Sorrows is an introspective melody that will slow your heart rate and change your mood. Phil created this probing, haunting melody, then gave it as a gift to Chapel Dulcinea at Wizard Academy. And now we’re sharing it with you. Enjoy. We’ll have another gift for you next week.

1 thought on “Are you Merely Determined?”